This summer, I had devised the perfect plan to decorate my yard and living room mantel with all things black and white for the Fall/Halloween season.  I had pinned ideas to Pinterest and was just waiting on October to arrive to put my plans in motion.  Then, I got a voicemail from my neighbor.  It basically said that everyone on our street was going to make scarecrows that represented their families.  All I heard was:  “Abort plans.  No black and white.  Begin stress sweat.”  Back to the drawing board…

I only have myself to blame for this.  Several years ago, I had taken various yard tools and made rustic scarecrows using rakes, shovels and anything else I could find and made them look like the members of my family.  I was told that this was the inspiration for the other neighbors creating scarecrow families this year.  Those original scarecrows were still out in my storage building so I thought that maybe I could revamp them with little effort and stick them outside again this year.  I ran out to the storage building only to find fallen eyes, crazy hair and faded clothing.  They would need a total re-do.

Where do I go when my creative juices aren’t flowing and I’m feeling overwhelmed?  Pinterest!

I found an awesome idea for making the bodies out of pvc pipes.  My parents came over one Sunday afternoon and helped me measure and cut the “skeleton” bodies from pvc.  We hammered in a piece of rebar into the ground and slid the pvc “leg” over the rebar to make them stand up. 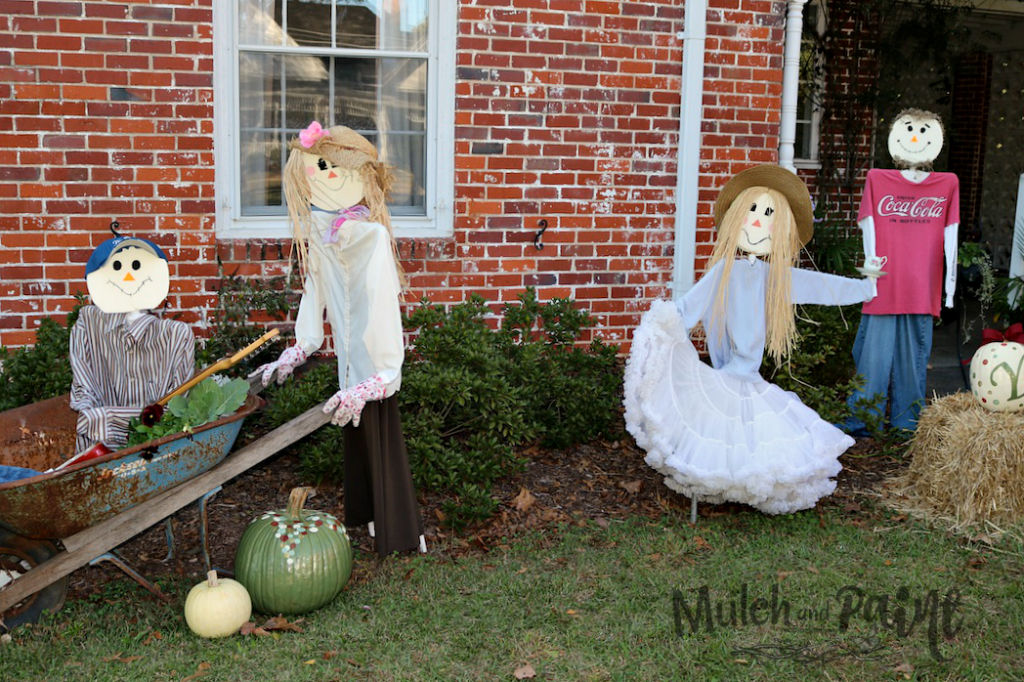 I wanted the scarecrows to reflect the personality of each family member.  Mary requested that she look like she was going to a tea party.  I glued a wooden base to her arm and then glued a cup and saucer to it.  An old hat was decorated with leftover flowers from various crafts for her head.  Her hair was made from raffia.  The faces were personalized with a paint pen and felt was cut for the eyes, nose and cheeks.  I bought cream-colored fabric that had a little stretch to it for the skin.  I used free styrofoam that was leftover from a box where we had bought a new television.  I cut the styrofoam in round discs, glued the fabric faces on and used thumbtacks pressed into the back of each head to give extra support.  The heads were attached to the bodies with a bamboo skewer going through the styrofoam head and more styrofoam pushed down into the pvc pipe.  (I think this has been my biggest issue since making them.  The skewer spins around and sometimes the heads spin like something from The Exorcist.  I have been experimenting but cannot find a solution for this.  Any suggestions would be appreciated!) 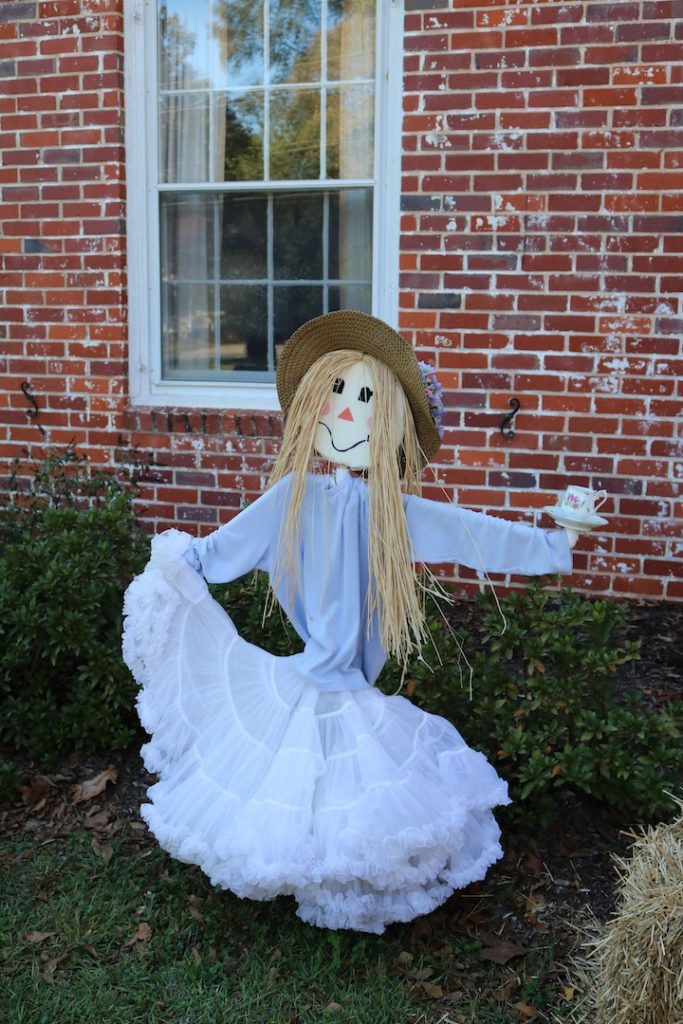 Trevor is our Coca-Cola loving child.  He not only loves drinking Coke but has a large selection of Coke clothing.  I chose to dress Trevor’s scarecrow in a Coke shirt.  His hair is made of Spanish moss and I gave him brown dimples on his cheeks to mimic the human Trevor.  I also hot glued some Spanish moss on the chin for his beard. 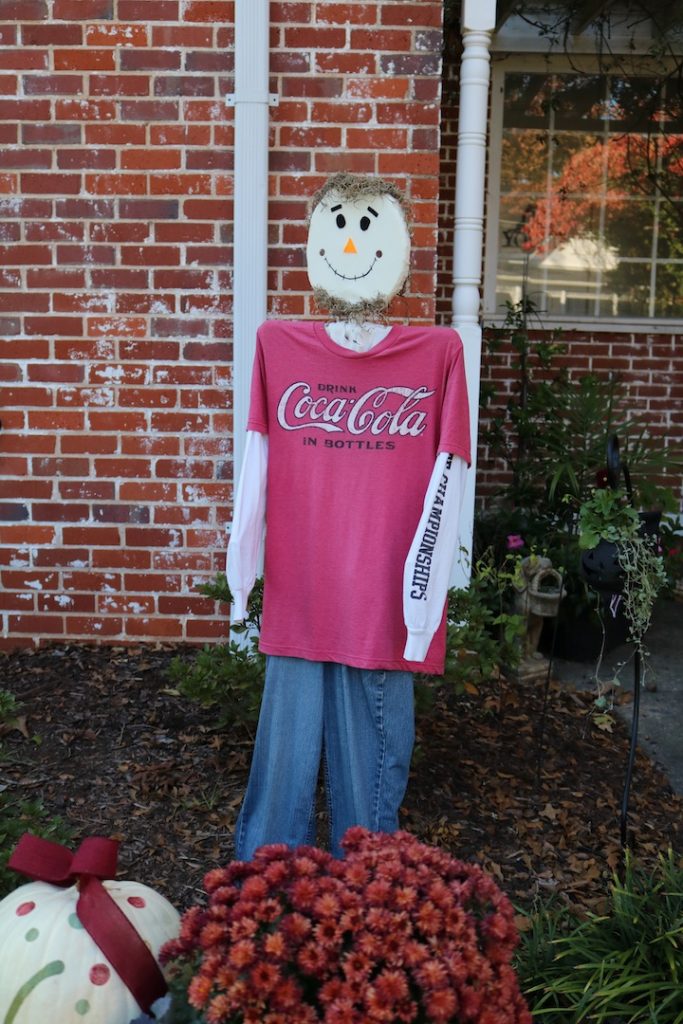 Here’s a photo of Mary and Trevor posing with their scarecrows:

(Can you see Lucy photobombing them?) 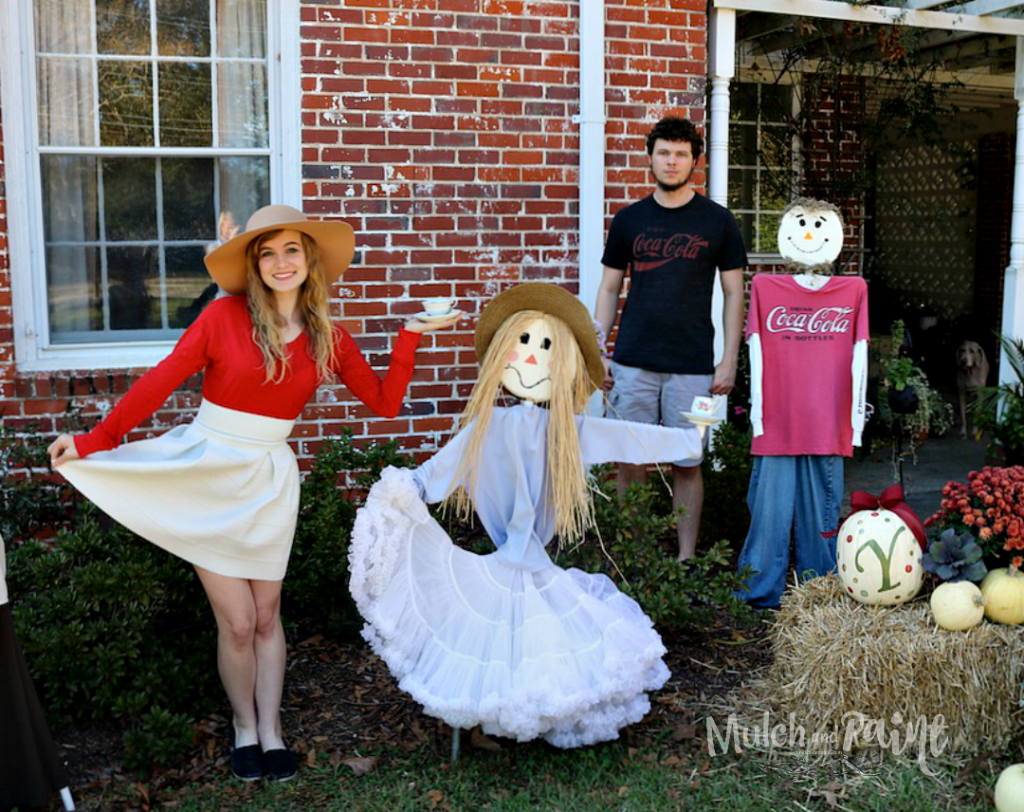 I have an old wheelbarrow that I had flowers and ivy planted in that sat in the back yard.  I dug up the plants and sat Donnie’s scarecrow in it.  He’s a musician-so I let him hang out in the wheelbarrow with a guitar.  I got pretty lazy and didn’t add feet or shoes to his scarecrow.  I did cut up a pool noodle and slid it over the pvc pipe legs to give them some bulk.  My scarecrow is the only one who has hands.  I made them buy pinning garden gloves to the shirt. 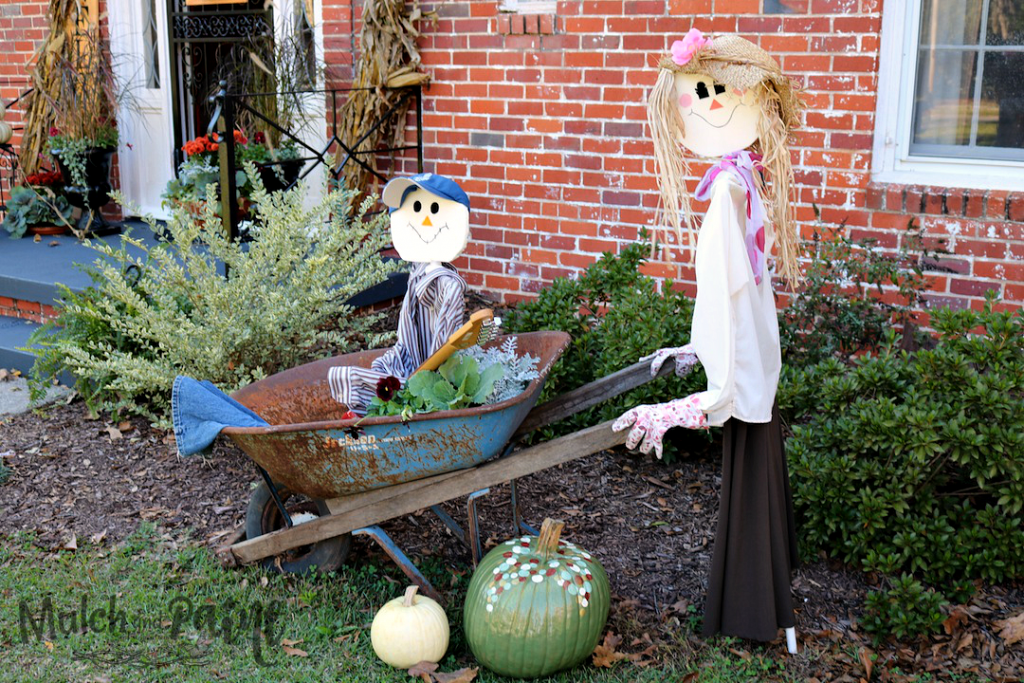 Did you notice my painted pumpkins?  It was way too expensive to buy white pumpkins this year so I bought orange ones and painted them myself with craft paint.  I sprayed some floral glitter spray on them once I was finished for a shine.

Below is a photo of Dylan and Kaytlen in front of the yellow house.  Dylan is moving into our rental house right across the street from us.  (We call it the yellow house.)  Dylan didn’t want his scarecrow to be alone so we added a scarecrow for his girlfriend Kaytlen.  Dylan is a golfer so we gave his scarecrow golf clothes and a club.  I asked him to get some golf gloves for his scarecrow but that hasn’t happened yet.  Kaytlen loves sunflowers and asked that we give her scarecrow a bouquet of sunflowers.  (I took this photo on  a cellphone so I apologize for the quality.)  Aren’t they cute together? 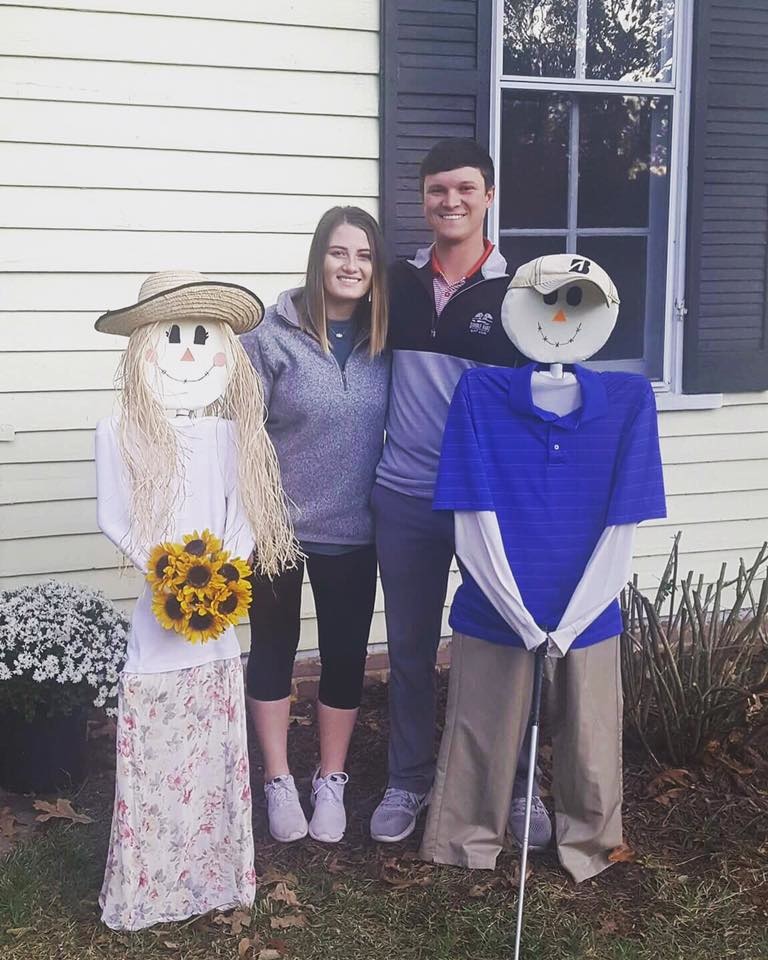 Below are a few of the photos of other scarecrow families on my street: 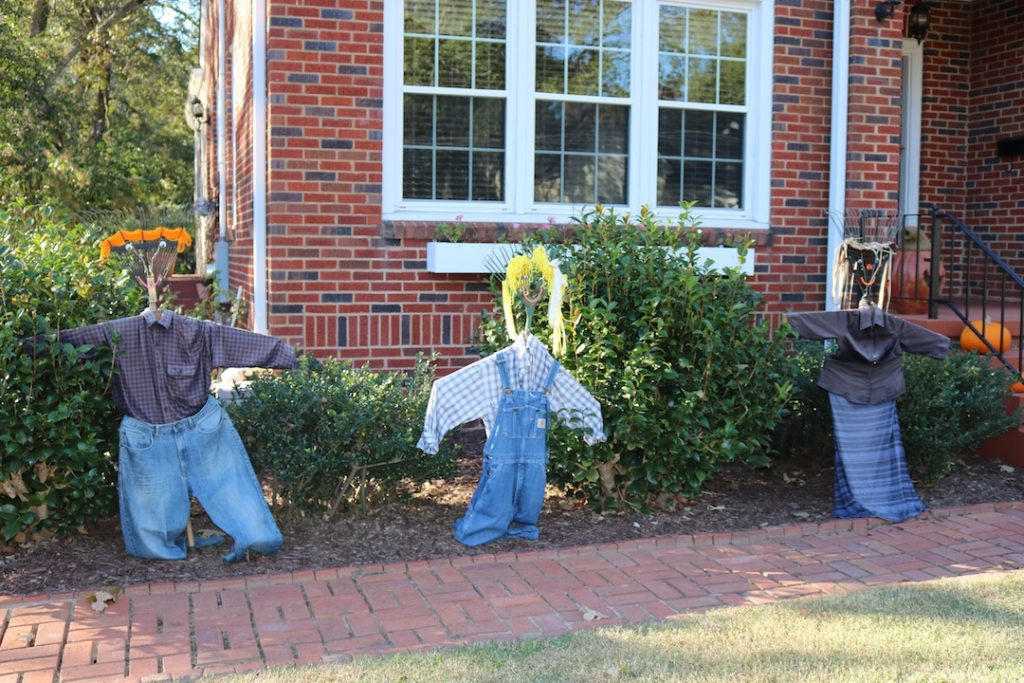 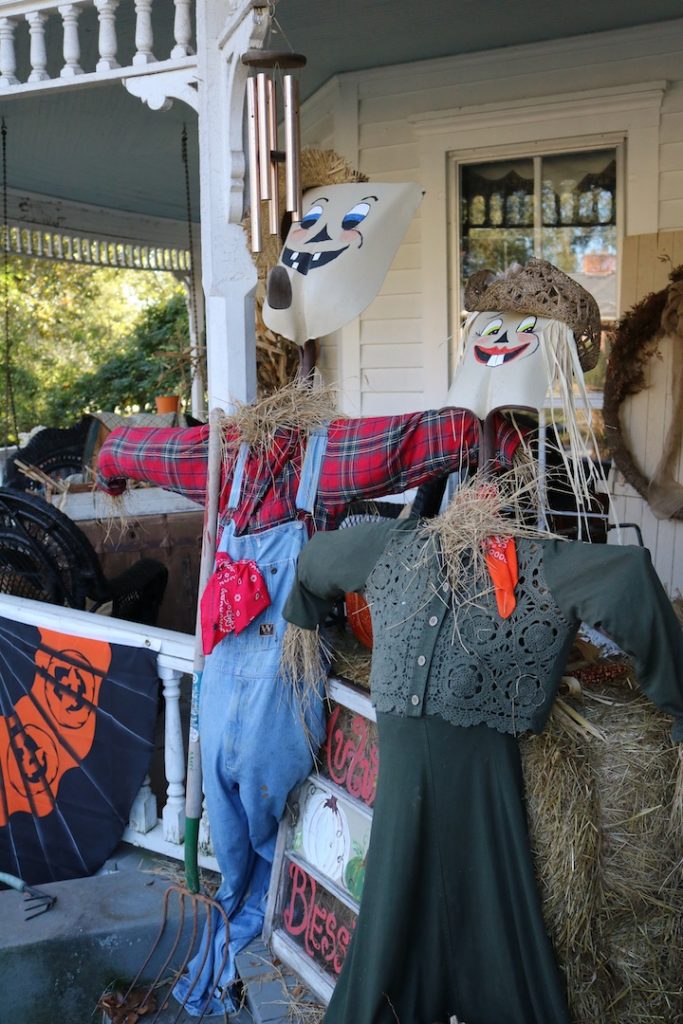 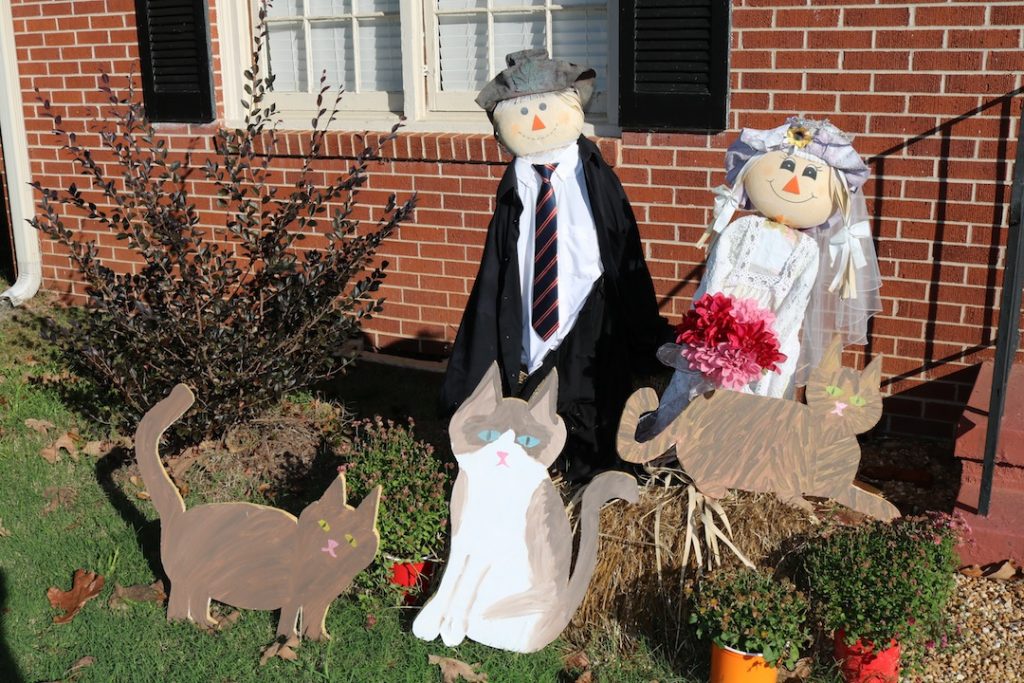 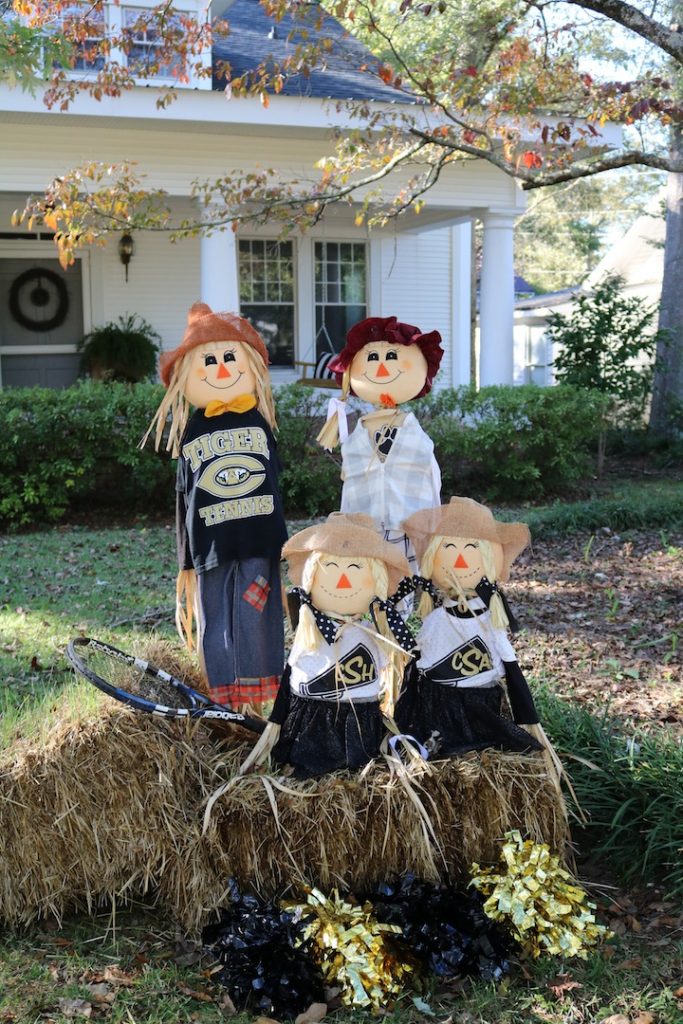 I think all of my neighbors did a wonderful job.

I have gotten a lot of sweet comments and feedback from people in my town.  Mary posted a photo on her Instagram page of Trevor and his scarecrow and it seems to be our most popular one.  The only issue we’re having now is looking out the window and thinking someone is in our yard!  I have been startled more than once by Trevor’s scarecrow!

Thank you so much for stopping by today! 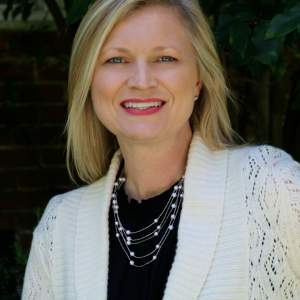 I’m a little late posting these, but better late

Happy Easter from Mulch and Paint! May your day b

I read an article from @southernlivingmag that sai

My dining room is basically my office. I spend mos

I cannot even remember how long it’s been since

Fall, you don’t know how much I’ve needed you!

The Breakfast Room Refresh is starting to get real

Lucy loves our new foyer rug! I love it because it

Whooo’s ready for the weekend? My neighbor had

One Room Challenge Spring 2021 is complete! I had

I’m a little late posting these, but better late

Happy Easter from Mulch and Paint! May your day b

I read an article from @southernlivingmag that sai

My dining room is basically my office. I spend mos

I cannot even remember how long it’s been since

Fall, you don’t know how much I’ve needed you!

The Breakfast Room Refresh is starting to get real

Lucy loves our new foyer rug! I love it because it

Whooo’s ready for the weekend? My neighbor had

One Room Challenge Spring 2021 is complete! I had